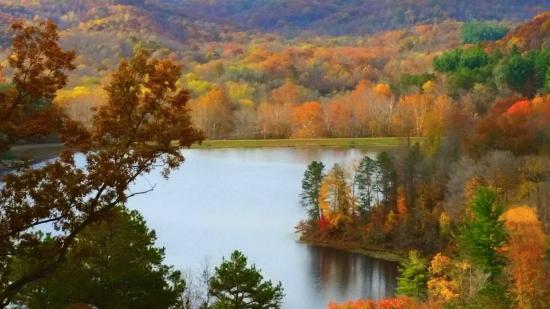 Ohio. It’s flat, right? Well, at least that’s what we think. Until you take a trip to the Hocking Hills area. Suddenly, you are transported to a different landscape.

My husband and I wanted to do something different; and we definitely wound up doing just that. I signed us up for the Brokemans race #optoutside, which is a trail run the day after Thanksgiving last year, thinking it would be a new adventure….and Lake Hope delivered.

As we drove there, I noticed the scenery and elevation changing. We hadn’t been to the area for a while, and the winding country roads took me back to some great memories on the trails there. I saw signs that tugged at my chest: Cantwell Cliffs, Rockbridge, Cedar Falls. Some of the fall colors were still lingering, though many leaves were already laying in a canopy over the ground.

When we arrived, we passed by the huge Iron Furnace and my jaw dropped. Amazing. We made it just in time for the start, thank goodness. No time to decide what extra clothes to peel off, so we just took off with the group, hooting and hollering like a bunch of children at recess! What an exciting adventure.

Going around the lake was perfect. The sun was up and the water was like glass. Beautiful. The trail itself was covered with a thick blanket of leaves and there were occasional patches of mud and puddles from the recent rains. It was as technical as expected during that portion of the race. Challenging, yet breathtaking.

When we hit the clearing, the first aid station and restrooms appeared. Time to peel off some of the top layer and keep moving forward to the street crossing.

Here’s where it got interesting….The group we had started out with had already split up quite a bit. No one to watch in front now, so we had to keep our eyes out for the trail markings. We began to climb….

As the miles started to add on, and we continued to climb, I had to curb my enthusiasm so that I would be able to have enough in my tank to hit the hard stuff later and still be able to finish. My husband soon went ahead. He always says he’ll run with me, but I know I’m slower than he is. So, off he went, and I tried to settle in a bit.

It was beautiful to see the sun coming in through the trees. The path had all but disappeared due to the amount of leaves that had fallen, so I had to keep an eye out for the tree markings and flags to make sure I was still on course. At times the path would be narrow and leave little room for error. One misstep, and you were over the edge. Add to that the roots that were spread like fingers across the path, and you had to be sure you were paying attention.

It seemed that we were almost always climbing. And, just when you sighed with relief that a downhill was around the corner, you realized that you had to pick your way carefully down the hill if you wanted to remain upright. No fast downhill’s today. Due to leaves, mud, roots, etc the downhills proved to be quite precarious.

After passing through the second aid station, which had some awesome people there with encouraging words, it was back up the side of what really felt like a cliff. It was at this point in the race that I struggled the most. Having just had a birthday that brought me up to a number I am no longer comfortable with, I realized how difficult things have become as I age. Up the hill I went, but I had to stop every 10 paces or so. Between my heart wanting to explode out of my chest and the lactic acid that was seizing my calf muscles, it was very slow going. So, 10 paces I went, and then I leaned on a tree to catch my breath. This continued for the entire climb.

When I finally reached the top, I took a moment to look back over my shoulder. Wow. I was hit with the metaphor of life. This is how you find out what kind of “stuff” you are made of. I remembered a quote that I had read somewhere, when Sir Edmund Hilary was asked “Why climb Mt Everest?” he answered, “Because it’s there.” Let that sink in….

As I began moving again, I had that moment of confusion where I thought I was off the trail. So, I stopped and spoke out loud to the trees…”Throw me a bone, would ya?” As I scanned the landscape, I finally picked up on a tree blazed with orange. Ah ha! And, I was off again.

Not long after that, my husband circled back and found me. I was hurting pretty bad at this point, and he could tell. As bad as my body was telling me to quit, my heart would not let it happen. I could always keep moving forward, I could always press on. And, so I did. When we made it to the aid station, we filled up again. Ah, lemonade. Wow, that hit the spot.

I was determined to finish this up. I knew we just had to go back along the lake, but my legs were tired and I was finding it harder and harder to clear the roots with my feet. More stumbling was happening, and my lower legs were not doing a good job of reacting so that I could stay on my feet. Needless to say, we pressed on. We saw people going back out for another loop; I personally don’t know how 2 or 3 loops would ever happen for me. I was inspired by their fortitude and the amazing stamina they had. Pretty much everyone I saw that day had a permanent smile on their face and some encouraging words as our paths crossed.

We wound along the lake for what seemed like ages; not at all like when we had first started off. I kept thinking, just move forward, don’t stop moving, and you’ll get there. Those tree roots almost did me in several times, like tiny little hands grabbing at my shoes. My thighs felt like there were ice picks in them, my calves were as hard as rocks, and my low back was aching. But, this is the stuff we crave. TO FEEL ALIVE.

I replied the only way I could, “Humbling.”

Yes, it was humbling, and yet wonderful. It reminded me of my favorite Robert Frost quote:

“The woods are lovely, dark and deep,

But, I have promises I must keep.

And miles to go before I sleep.

And miles to go before I sleep.”

One thought on “#optoutside”